Kent has had many National Collections in the past which have either been lost or are continued in a different place or form.

Chris Searle was an exemplary collection holder and had made plans for his collection of Hemerocallis – post 1970 cultivars once he could no longer keep it up.  As well as holding on to many of his plants, he also gave one of each variety to Paul Harris who was hoping to start his own National Collection here in Kent. Paul now holds the National Collection of Hemerocallis with the RHS Award of Garden Merit.

Here is an account of a Kent Group visit to see the daylilies in 2004 written by Tricia Adam, then National Collections Co-ordinator for Kent.

After so many rainy, cool days this summer we managed to have a perfect day for our visit to the National Collection of Hemerocallis, post 1970 cultivars held by Chris Searle in Sturry near Canterbury. The second and third weeks in July are usually peak times for blooms and this year was no exception.

This was not my first visit to the collection but as always, I was enchanted by the beauty of the plants and the setting as, to judge by their reactions, were all those who came.

The small front garden looks no different from those of its neighbours and gives no hint of the pleasures awaiting beyond the gate. The small side garden is shady and planted with shrubs and lush shade loving plants including hostas.

Chris grows over 800 different Hemerocallis and the more modern cultivars make up the National Collection.  One begins to wonder where these plants can be but on going through a narrow archway the first of the garden rooms is revealed. Here daylilies in gentler shades of cream, pale yellows and pale and deep apricot are interplanted with blue and white agapanthus and hardy geraniums and backed by climbing roses and clematis. 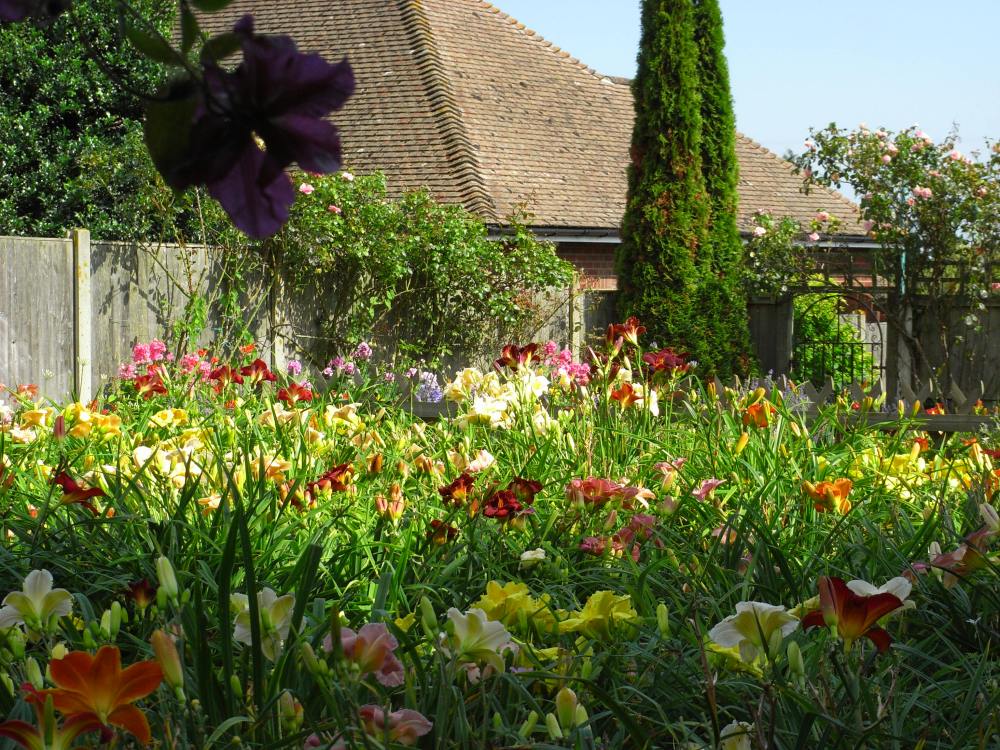 Through another arch are two more garden rooms, full of daylilies of every colour. I felt as though we were standing in the middle of a rainbow! The only colour not found in daylilies is blue and luckily that was provided by the sky. Many of the plants are in pots though that is not immediately apparent but some are planted out in borders to show their ultimate size and flower characteristics which is not always true on young plants.

Chris runs this as a small nursery but the use of evergreen hedges, pretty bamboo fencing, pergolas and a little summerhouse make it seem like a well-tended garden rather than a nursery. Among the Hemerocallis are planted a growing collection of Agapanthus cultivars and Crocosmia, including some Chris has bred himself. The combination is stunning!

Most of the modern Hemerocallis cultivars were bred in the United States and Chris imports many of his stock plants. He is constantly in contact with other growers and is doing some hybridising himself. The new cultivars have an amazing colour range: deepest plum that looks almost black, pale violets, reds, yellows, orange, apricot, pinks, some are self-coloured, some bi-coloured. They often have rounded or ruffled petals, some have dark eyes or picotee edges.  Some are so exotic they look as though they belong in a tropical house, others are demure enough to fit into any garden. The spiders have graceful flowers & foliage and are growing in popularity and look good in most borders.

Chris’s knowledge of Hemerocallis is phenomenal. Most of us arrived around 2 pm and didn’t leave until 5pm which indicates how interested we all were. There was much discussion as to which plants everyone liked best and most of us had great difficulty in deciding. We all ended up buying several favourites and wished we had room for hundreds!